I honestly didn't have a topic this morning when I first woke. As I started reading within my various social media groups, one quickly emerged.  I am a member of a few private groups on Facebook - mostly running/fitness or mom related.  Some of the groups are large - 1000+ members and some are small 40+ members.  Only 1 large group that I participate in maintains civility all the time.  Yep - ONE!

I was trying to determine why, when it hit me.  First it is Disney running related.  I mean, who can be mad in the Disney world LOL.  But second, it is also mixed sex, meaning male and females are members of the board.  There is occasional snarkiness, but for the most part, things stay pretty mellow.  I like it there.  I think the men balance it out because well... let's be honest, they aren't quite into the drama that women are. 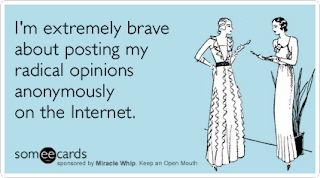 Then there are the other large groups.  They are ALL comprised of women only.  And let me tell you, there are a lot of unhappy people out there.  I don't know if it is because they can hide behind the computer or what, but it seems they think they can just say whatever whenever.  They don't care or think remotely before typing.  I have already removed myself from one group because of such behavior.  I don't need negativity in my life - especially virtually.  I might be removing myself from another as well.  I haven't decided yet because as a whole, I like why the group came to be.

I maybe am not meant to be in a large crew like that - maybe that is why sorority didn't stick for me LMAO.  I like the smaller tight knit group where people care about each other, and know when to censor themselves.  Where they watch out for each other instead of attacking words.  Because truthfully, typed things are not always as they appear.  You can not tell inflection, tone, facial expressions someone has from a typed post.  You have to stop and think, and sometimes let it go.