When you are building/buying a house, you are looking for all sorts of things - this size yard, a walk out basement, a 2 car garage, maybe a decent school district.  There are a few things that I wish I had considered now.  First Universal Pre-K - FREE 4 year old pre-K instead of the $1200 or so that we invested so K-Man could go 3 days a week.  Also, I really wish we had realized that Kindergarten in our district is only 1/2 day.  Neither is a huge deal, but literally 5 miles away is a district with universal pre-K AND full day Kindergarten.

Alas, we are where we are, and we were dealt afternoon Kindergarten.  I actually think we might have gotten the better of the 2 options.  Morning Kindergarten starts at 8:05am and ends at 10:40am.  That means an awful early morning to catch the bus, and the kids are home by 11am.  If you needed to run errands or anything, you are limited since little is open when they actually leave the house. 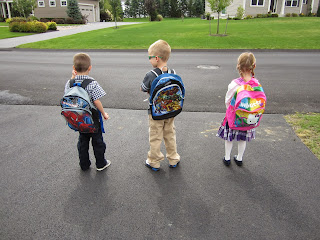 Now to the perils of 11:40am to 2:15pm for Afternoon Kindergarten.  We had to first figure out when the heck to eat lunch.  He catches the bus at 11:23am - luckily right out front, but still.  My son eats like his dad, slow and methodically.  And he also eats a pretty large meal for a 5 1/2 year old: ham and cheese sandwich along with fruit and milk.  After a couple days of trial and error, we have settled on 10:30am, which sounds utterly ridiculous.   It is however, working.  He rarely finishes his food by 11am, so there is still plenty of time for shoes, bathroom and getting the backpack before heading out the front door.

Problem number 2 comes after the bus leaves.  Never mind the fact that the driver has not been on time EVER in 4 weeks of school.  Mini-Me and I can't possibly leave the house before 11:30, putting us anywhere (grocery store, post office, etc) by 11:45 at the earliest.  We have exactly 1 hour to get things done and be back in the car heading home so she can nap at 1pm.  I feel a little crazed with this, no lie.

This week, I am going to start a new "routine" so to speak.  Mini-Me has library class on Mondays, and K-Man joins us.  If we don't HAVE to do anything else, we will come straight home after and have lunch.  If we do HAVE to do errands, we will take lunch and drop K-Man at school instead of him riding the bus.

On Tuesdays, we are going to grocery shop.  I haven't decided just yet if it will be with both kids or after the K-Man goes to school.  There is also the possibility of grocery delivery, but it also requires preplanning.  I have to look into it again.

Wednesdays we are going to stay home until nap so that we can get some things done around the house.  I am going to reserve this for playdates too.

We have an arrangement with the neighbor that K-Man will get on the bus at their house on Thursdays.  This lets Mini-Me and me go run errands earlier than 11:30.  I have decided to use this for those multi-stop errands - Lowes for X, USPS for Y, Target for Z...

And finally, Fridays, we will again stay home to try and get things done in the house.  Oh, and I need to run sometime in there!!  Let's see how this pans out.
Posted by Unknown at 5:20 PM