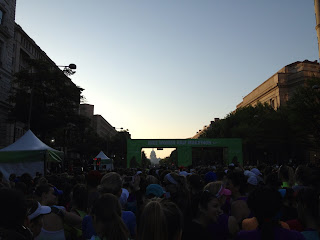 Our hotel was about a 30 minute Metro ride from the start of the race.  Some people were leaving very early for the 7am corral start, but my roommate and I opted for a little later.  We didn't want to be standing around, anxious too long before the start.  As it was, I would say we still ended up with 30 minutes extra after getting down there.  Of course that is was perfectly fine.  I kept hearing about needing the porta-potties prior to a race, but thought "what for?"  Let me just keep it as clean as possible and say... your body JUST MIGHT want to process that nervous energy, so leave time just in case. 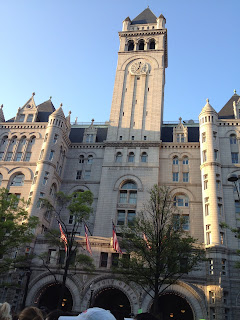 We hit our corral just before time and shed our throw away shirts.  It was a little chilly that morning, but the sun was planning to be on while the race happened.  I took these photos just at the start.  Obviously, it was a little late on the start, since I snapped the 7:00 on the clock.
I ran with my roommate for a little over 8 miles.  She helped guide me through, as this was her 34th half!  Start slow, don't let the excitement use all your energy in the beginning, cut to the inside for the upcoming turns, etc.  The sites were beautiful.  Perfect sun, not too hot, green everywhere!  In the beginning, there were lots of spectators.  Then throughout the race, we were entertained by Chinese drum lines, African dancers, full marching bands, rock bands and more.

I got a good chuckle making the circle over the Arlington Bridge, as I remember it as a child.  We made that loop accidentally once or twice.  I think my favorite part was the last mile where we ran the circle in front of the Capitol.  A spectator was holding a sign that said only 4 more laps on the track.  Whew!  I can do that, I thought.  In the end, I crossed the finish line with my own personal record of 2 hours, 13 minutes and 30 seconds.  I had text messages as I crossed the line, congratulating me and reminding me that just because family and friends were not there, they were still watching me.  I was greeted instead by smiling men in tuxedos holding trays of little blue Tiffany boxes.  Tough way to end a race, huh? 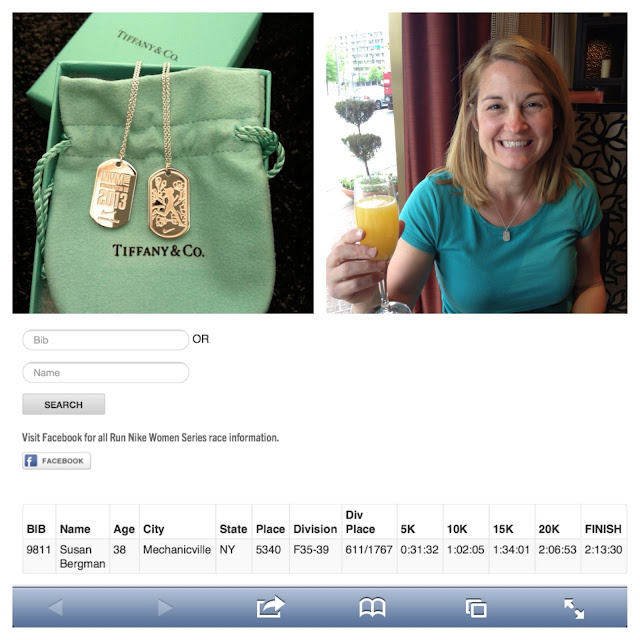 Next stop... Disney Wine and Dine Half in November and perhaps a little trip to Presque Isle as well!
Posted by Unknown at 8:00 AM