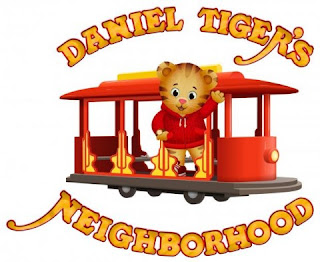 We keep watching this Daniel episode about trying new foods, and they make what they call a Banana Swirl.  It was simply putting bananas into the freezer, then once frozen throwing them into a blender until at an "ice cream" consistency.  No milk, no sugar, no nothing else!  Just Banana.  I almost always have bananas in the freezer.  Once they pass their prime, I throw them in so I can make muffins or bread later.

K-Man has been asking for awhile to try, so I figured why not.  After dinner last night, I grabbed to frozen bananas, peeled them with a knife.  Skins on frozen bananas are tricky.  I don't have a fabulous blender, so we used the Cuisinart, which works better and quieter anyway.  Can I just say YUM?!

Seriously, this was like having an ice cream only the only ingredient is banana.  K-Man, of course had toppings on his, but Mini-Me and I thought it was fabulous plain. I think I found my go-to dessert for the summer!
Thank you, Daniel Tiger's Neighborhood on PBS.
PS:  If you kids aren't already watching it and you were a Mister Rogers fan, you will love this show!
Posted by Unknown at 4:02 PM