We had such a productive weekend as a family, that I was having trouble coming up with a topic.  So how about a Recap? 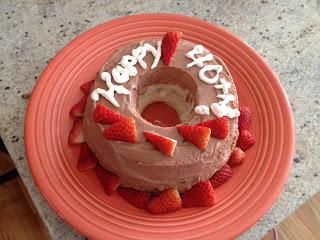 The Mister turned FORTY on Thursday last week.  How did that happen?  That means I will be 40 myself in just 1 year and 4 months.  Sigh.  At least I don't feel it, and hopefully don't look it.  I will survive!  I treated him to his favorite cake (angel food with pudding/coolwhip filling) that night.  The K-Man helped decorate it with strawberries.  Then we had a nice romantic dinner at one of our favorite restaurants, The Prime at Saratoga National on Friday.  We didn't realize it was restaurant week, not that we would have necessarily partaken, but it meant the restaurant was PACKED.  We still enjoyed! 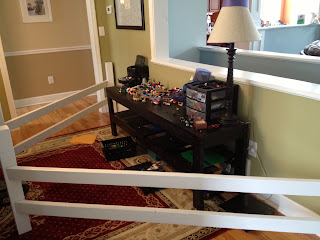 Saturday morning, the K-Man had his test for the Tae Kwon Do blue belt and kicked board - literally.  He was the only kid to break the board on the first try.  In fairness, he was also the 2nd highest rank there and has been at it for over 1 year now.  Kind of sad that we didn't get a picture, but Mini-Me started to expire, and we had to escape. 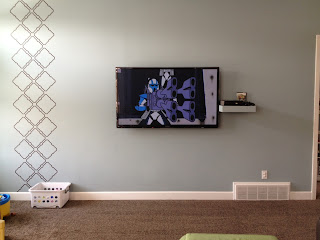 Then we went shopping for the myriad of household projects we have lined up for ourselves.  Lego Land has been relocated to the Dining Room.  With the way our house is situated in a very open floor plan, it made sense.  Truthfully, we use that room 3-4 times per year for special dinners, so he can monopolize the majority of it.  If we NEED the space, it won't be hard to maneuver.  And the big bonus, it isn't in my Living Room anymore, but he is still in the same area with us.

The Mister also made a new shelf for the Xbox.  I only asked for something that would fit the unit and controllers.  I love how it turned out!  I didn't expect him to paint it the wall color, but love the effect!  Excuse Mini-Me's toys on the floor.   I do the toy sweep at bedtime, not midday :).  We are absolutely adoring the new carpet too.  It is SOOO much softer and forgiving to children and adults alike.  Doesn't the new TV look little.  Uh, yeah - it's 65 inches!!  Yikes!  And of course, that is some Star Wars show on the tube too.  Thank goodness for YouTube.  The boy has endless hours of entertainment.  Only 1 other project in the living room, and I can show it off too.  The Mister is getting ready to start making our coffee table.  Gotta love a handy man with all the right tools!

On Sunday, I snuck in a 6.5 mile run at a happy pace - 10 min 5 sec per mile!  Then it took me nearly 2 hours to locate a dress for Easter, but I did it!  Some styles just don't work on me, and unfortunately, they are currently dominating the store.  One is the infamous shift dress.  Guess what that does off a ample chest - nothing!  It shoots straight down making me look like I have ZERO waist.  Then there is the empire belted with a fuller skirt.  The empire isn't terrible in its own right, but the belt and fuller skirt not so fab.  Oh well.  I got something and that is what is important.  Hopefully some nice family photos to follow.


Hope you all had a productive weekend too!