In my small little world of raising 2 kids, I find myself saying things over and over.  Maybe they are simple things like, use your fork or say please and thank you.  But some things that seem small could inevitably be life changing should my children not get the reason or meaning of what I am saying.  As I discussed recently, we are having a "tackling" issue here in the house.  Mini-Me is pretty vocal in what she is willing to participate in, so I find myself reminding the K-Man that he heard the words "No" from her and he needs to respect that.  No means No. 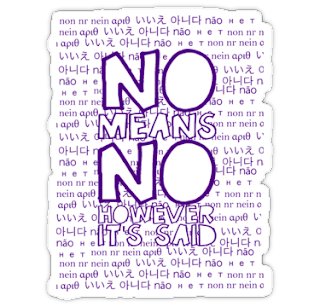 Such a simple little word and concept to us, except when awful things happen in the world and you realize that me teaching him just that is extremely important!  The problem is that he doesn't seem to be catching on as quickly as I would think.  The boy just turned 5, 2 months ago.  His is intelligent, no delays, etc.  So what am I doing wrong?  We have tried rewards, punishments, ignoring, yelling, redirection, but nothing quite does the trick.  I took some education classes.  I know the techniques, but still can't seem to make them work here in my own home.  I know that negative reinforcement is not the preferred method, yet so far it is the one thing that gets his attention faster than anything else - at least for a moment.  That is just it, though, it lasts for a moment.  I guess that is why it isn't preferred.

The thing is, K-Man isn't malicious.  It isn't that he wants to hurt his sister, or ignore my wishes.  You can see genuine emotion when he is corrected or that happens.  He just can't seem to control himself once he gets all excited and that scares me.  Even if it is just learning that my daughter's verbal cues or blatant no's still mean no, he needs to understand that it is a sign of respect.  Just as it is a sign of respect to understand if Mom says no, you don't keep asking or you stop.  There are so many reasons understanding this concept is great for him.  I refuse to stop trying.


Any advice out there from the moms that have already encountered this?  Is it just the age, and he will get it?  Or is there some method I need to stick with?  HELP!
Posted by Unknown at 8:17 AM

Labels: No Means No