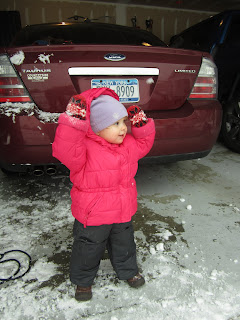 After living in the south for almost 10 years, you would think I wasn't all that thrilled with snow.  Honestly, I don't mind it.  Snow isn't a big deal in a place where they know what to do with it.  Goodness forbid snow hit the ATL.  Stop the world and stock up on bread and beer water.  Here, you can likely get out within hours, unless it is a blizzard.  The only time I truly have minded snow was when it was April and it just kept coming.

Of course, I am pretty certain that is more because our seasons have shifted.  Big snowfalls used to come in December and January when we were little, but now they are more like February or March.  Seriously, doesn't anyone else see this?  Summer heat is coming on later, fall is all the way into November now.  Maybe it is me from living in a place without a true 4 seasons for too long.  LOL 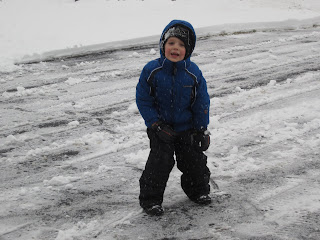 Anyway, one of the greatest things about snow is that we (the adults) get to act like kids again and go play.  So once Daddy took on the task of clearing the drive with the snow blower, we tossed everyone out in the snow.  As a side note on this, my snow pants no longer fit, in a good way!  Thank goodness they had velcro adjustable sides or my tail would have been a little on the cold side.  This was Mini-Me's first foray into the frozen world.  While she seemed to like it ok, she didn't care if we stayed out too long.  The K-Man on the other hand would stay until fingers were near frozen.  The mention of hot chocolate tends to lure him back indoors though :). 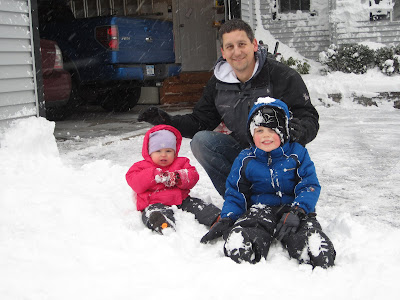