Running shoes, that is!  It was roughly 1 year ago when I started my shed-the-baby-weight-loss project.  Actually, I started more around 6 weeks post-partum, but this is the anniversary of starting Boot Camp with Make It Fit.  That was an experience and truly a great one for me.  I hadn't worked that hard since Rudy Marisa's basketball camp at Waynesburg College.  I was 13!  Seriously, this was a workout like none other.  Not to mention waking up at 5AM to go so that the Mister could still be here in case the kids woke.

Anyway, back to the point.  I went to the first day of Boot Camp in my Sketchers Shape Ups.  It was the only pair of tennis shoes I owned.  Don't judge!  I have a high arch and trouble finding something comfortable, but these worked fine for me for the last year of Stroller Strides.  Drill Sargeant Mel wasn't impressed though and was a little concerned for my balance during Plyometric type exercises.  So off to Fleet Feet, I went.  I was still fighting that summer into fall shoe thing, and stupidly wore sandals into the store.  They probably thought I was mildly dumb.  To be fair, they would have been right.  Prego brain was still rampant in my body at 8 weeks PP.

I explained what I would be using the shoe for, how often I would be wearing them, etc.  They sized me and I tried a zillion on - all with a baby in the stroller and a toddler racing around the store.  Thank goodness, they were patient!  I ended up with a pair of Nike shoes.   This was surprising to me, as I haven't worn that brand in a very long time.  Of course, it might be because I was trying the wrong size or that you can rarely find a shoe store with this type of attention to the customer.  There I was though, leaving with a shiny new pair of shoes. 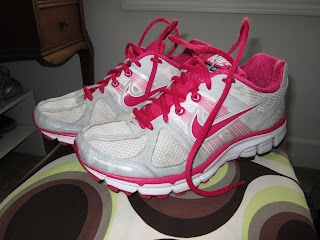 Flash forward to 1 year later though, and oops!  I am still wearing that shoe.  That probably wouldn't be a big deal, if I hadn't started running in February 2012, when we bought a treadmill.  The shoes weren't technically a running shoe in the first place.  Since February, I would guess I average around 3 miles a day, 3 days a week.  In roughly 36 weeks, that means I have logged around 324 miles, not including the 6 months prior with bootcamp and other workouts!  So, after this weekend's 5K, I am hanging up these running shoes.  But only because Mama DESERVES a new pair!  Bye, Bye Old Friends!
Posted by Unknown at 12:25 PM