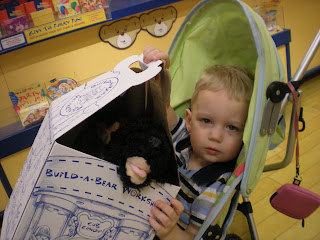 Maybe I just need to try harder to tire him out! This morning, we went on a Mommies' Outing to Build A Bear then to Hoffman's Playland. Add to that 85 degree weather and we have one sleepy boy by the time you get home. Build A Bear had its highlights, but sadly the part that is supposed to be so cool for him, scared the bejesus out of him. For those new to the BAB concept, you are supposed to pick an "unstuffed" animal, then they stuff him for you including a heart. He chose the Portugese Water Dog, like President Obama's family has. Kyle particularly liked its tongue and nose. We also added the bark for the full effect. Unfortunately for Kyle, the stuffing machine sounded more like a giant vacuum. Did I mention that he hates vacuums? He screamed and cried during the whole "stuffing" experience. Then she hands him his puppy to check the stuff level (with me saying in the background - "don't do that or he won't give him back), but did she listen - NO. The problem with this is that they still need to finish sewing Puppy and now Kyle is again screaming to have his puppy back. UGH! After traumatizing him with the sounds and stealing of toys, he happily walked around the store to try out the puppy houses, which to his dismay I did not buy. Don't feel too bad for him because Mommy knew that his puppy would come with a cool box which could double as a doghouse once we got him home. 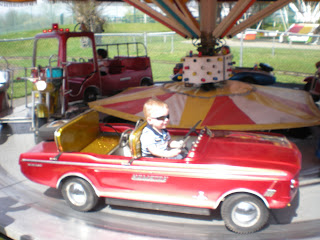 After BAB, we headed to Gymboree where I was desperate to buy him these way cute construction PJs. YEAH! They had them :o). I also picked up a pair of shorts and top, since the poor boy's stuff is in storage. How was I to know it would be this darn hot in April? We still had time before the Playland opened, so we had some lunch with Betty and Evan, then took off for our first amusement park adventure. Hoffman's is very much like a permanent carnival - Ferris Wheels, Carosuels, Tilt-a-Whirls, etc. Since we are thinking of going to Sesame Place this summer, this is a good training ground so to speak. Most of the rides are geared to the toddler, small child range. Some things Mom could ride along, but others not so much. We started easy with the stationary cars and motorcycles that go in a circle, but not up and down - sort of like a carosuel. He tried the bus, but desperately wanted to be on the motorcycle, which he wasn't quite big enough for... then settled finally in the T-bird for the ride. He also attempted a helicopter ride, which he was fine on until it started going up and down in the air. You could hear a tiny "help" each time it went around. I have to say, I was surprised that it did that much motion for a ride they had to do alone. His buddy Evan wasn't any more enamored with it than Kyle was, so apparently 2 year olds just shouldn't do it. Not that I am surprised, but his favorites were any form of transportation that didn't leave the ground - firetruck, 4x4 trucks, train, t-bird. My boy is definitely all boy. He begged to stay longer, but with the hot weather, which we weren't dressed for including lack of sunblock and the rapidly approaching naptime, I thought it best to head home. He was out in minutes. Sometimes, I am right.
Posted by Unknown at 1:22 PM