Jeff has the camera on his trip, so these are from my phone. We haven't slowed down any with daddy out of town. We went to the firestation, saw helicopters at the neighborhood Christmas event, played at the bounce house, and got a (GASP) haircut! 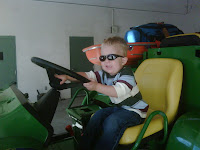 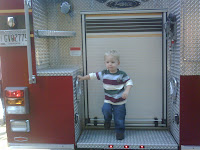 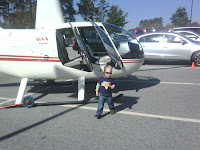 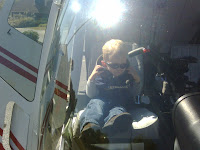 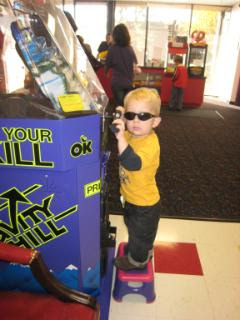 Haircut and "Cheesing" for mom to take a picture. 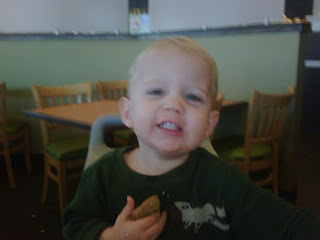 He is SOOO all boy

Last night as Kyle and I sat reading books before bed, we heard a strange sound. It sounded like a cross between a sneeze and a gag. Since Jeff is out of town, we had to assume it was a cat :D. Kyle started giggling immediately. Ginger did it again, and he giggled harder. Of course, this started me giggling. I can already foresee his future... giggling because someone said "nuts" or some other benign word that COULD have another meaning. Hmmm... whoever could that remind me of - JEFF?
Posted by Unknown at 2:28 PM No comments:

The Bergman family has lots of changes in the coming months. First, Jeff has taken a new job within GE Renewables. He is still catching the wind, but now it requires us to move with it... to Schenectady, NY. Can anyone say BRRR? Seriously, we are very excited about the new opportunity. There are lots of positives about moving North. Kyle will get to have 4 seasons including snow, the schools are far superior
and the traffic is a non-issue. His commute to work should rarely exceed 30 minutes at any time of the day.

Of course, moving means selling this house that we love. Bye, bye to the beautiful golf course view. Hello to building the home just like we want! We have been so spoiled with this place that we couldn't find anything to compare. Hopefully, the blueprints are underway! We will be anxiously awaiting an April move in! Did I mention that we sold our home already? In 17 days? Who says houses aren't selling :o)!? The best part is that the new owners-to-be are renting it back to us for the next 4 months, so we won't have to worry about temporary housing while the new place is being built!

Outside of that, I have TONS of Kylisms to share. I swear he seems to learn something new every single day! He has lots of words now - mostly involving transportation - of which he is absolutely OBSESSED! Car, truck, helicopter (I wish you could hear this though - totally precious!), train, clock, kitty cat, blueberries, and the list goes on. It is so funny how he can do what I would think are more difficult words, but balks on the easy stuff!

Kyle is very expressive now. OK, maybe that should read - DRAMA! The boy is over the top sometimes for the simplest things. I do believe we are hitting the "twos". If he can't do a minor task, he seriously fake cries. Too funny.

Some highlights of our week so far - Kyle came to the couch with this crinkled nose look on his face. He waved his hand in front of his nose like something was stinky. I asked what was wrong, thinking diaper. Then he led me to the kitchen and pointed to a paper towel. I asked if he wanted one. As I tore one off and went to hand it to him, he took off to the dining room. Turns out a cat had puked. I apparently needed to clean it up! Seriously, does he take after mom and dad or what???

I bought some prepared cookies from Nestle this week on sale. I thought Kyle might like to have a sugar cookie now and then and I wouldn't have to bake them all at once. Tonight, we tried them out. I decided to bake 4 stocking shaped cookies. Of course, to my son... they were DRILL shaped. Who else's child would think that? Kyle walked around making his drill noise, holding it in that manner.

Speaking of tools. A friend of ours from our Mommies' Group gave us a play shopping cart nearly a year ago. And Kyle loves it. He plays with it all the time. It must not be rolling quite as smoothly these days. Today, I found him turning it onto its side. Then he proceeded to get his toy hammer and screwdrivers out to do some maintenance. Only in the Bergman/Szabo house - he gets it honest from the both of us. Sorry! No pics. Daddy has the camera in India at the moment.
Posted by Unknown at 9:46 AM No comments: