Does anyone remember what it feels like to get new teeth? ME EITHER, but apparently it isn't fun! We have now survived the arrival of tooth number 3, and pretty sure another will be arriving shortly. He has the front bottom two and one on top. I thought the one on top was the front tooth, and if it is, I had better save for braces now because it is awfully far to the side :). After closer inspection, I believe it is actually the one NEXT to the front two. 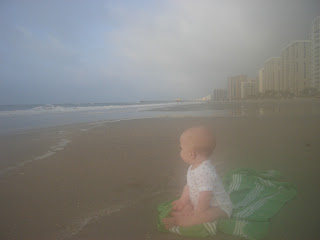 Mr. Kyle has had a busy summer. He has been to WV, Boston, Disney, Baltimore and Myrtle Beach! I think he might be breathing a sigh of relief that the next trip isn't until October. In the meantime though, I do think he has inherited my love of travel. He has gotten to spend time with distant cousins, meet Minnie Mouse, and stick his toes in the sand. What's not to love?
Kyle amazes us daily with his new feats. One of his latest accomplishments is learning to wave - sometimes it is a little flick of the fingers and other times it is a full arm. He is also commando crawling - imagine the little army men that were posed on their bellies. He moves his arms and drags the feet behind. The cats are horrified, as you can imagine. Ginger and George have been the best sports. They let him tug on their fur and tails... well, to a point! Fred is the biggest chicken of them all and of course, that makes Kyle all that 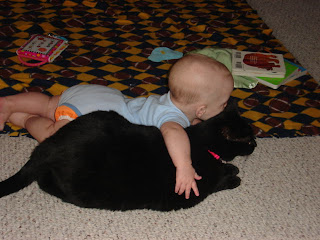 much more interested.
Kyle has been trying new foods almost daily. I don't think he has met one he doesn't like though :). He has had cereal, carrots, sweet potatoes, avocado, green beans, peas, yogurt, applesauce, pears, and those cool little Gerber puffs. Those puffs are our friend when we are out of the house and a few minutes late to the house for a feeding! We can't tell which is his favorite because he makes a "mmmmmm" sound with every bite of every food. I am trying to make some of my own, but some foods are just as cost effective to buy jarred. Gerber's new packaging is actually great. They are small rectangular containers. No more trying to reach into the nooks and crannies of a jar. 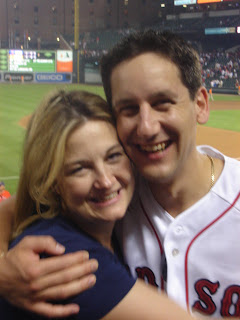 In Baltimore, he discovered his love of science (THANK GOODNESS - with the parents he has got!) We took in the Science Center with Aunt BJ, Uncle Ken, MaMa and Grandpa Szabo. He loved the science displays! For instance, they had a Jacob's Ladder display where the spark jumps up to metal rods. He would study the spark all the way to the top. Kyle also learned that trains are way cool thanks to his Uncle Ken and cousin Zach. I see Thomas the Train in our future. Actually, he will be inheriting his Daddy's Brio set, which we are very excited about! Kyle had his first night away from Mommy and Daddy on this trip too. We took in the Sox/Orioles game for our 7th anniversary. Can you believe it has been 7 years??
Posted by Unknown at 8:30 PM